How Melissa Lucio Went From Abuse Survivor to Death Row

Why some trauma victims are more likely to take responsibility for crimes, even when they may be innocent. 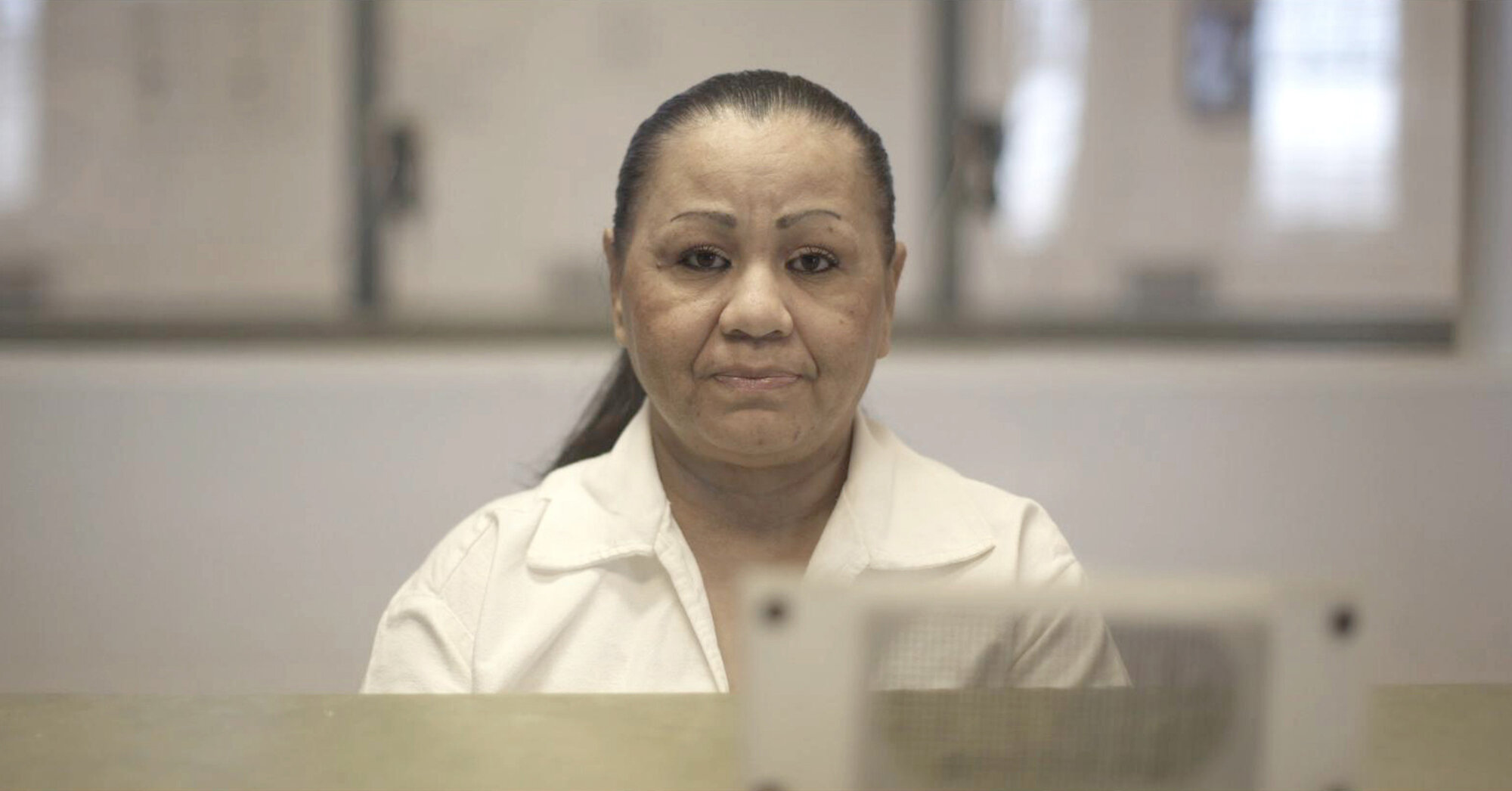 Melissa Lucio was sentenced to death in Texas after she confessed to beating her 2-year-old daughter, who later died. She says she was coerced to confess by a Texas Ranger during her interrogation. FILMRISE
By MAURICE CHAMMAH
The death penalty is in flux. These are the stories that you need to know about capital punishment’s past, as well as its uncertain future.

The detective handed Melissa Lucio a plastic doll and asked her to spank it. “Do it real hard,” he said.

Lucio had already spent five hours that night, in February 2007, answering questions about the death of her 2-year-old daughter, Mariah Alvarez. She initially said Mariah had fallen down a staircase outside the family’s apartment in Harlingen, Texas, a small city near the Mexico border. But Mariah had bruises, bite marks and other injuries. One of the detectives, a Texas Ranger named Victor Escalon Jr., zeroed in on Lucio’s slumped posture and lack of eye contact. “Right there and then, I knew she did something,” he later testified.

This story is a collaboration with The 19th News, a nonprofit newsroom covering gender, politics and policy.

The Rangers are famous for their unorthodox interrogation methods, as The Marshall Project reported recently. Around 3 a.m., Escalon handed Lucio the doll, showing her the locations of the bruises and asking her to hit those spots. She admitted to hitting her daughter — “I just did it,” she said at one point — but not to killing her. At her trial, prosecutors framed her admissions as a full confession.

On April 27, Texas plans to put Lucio to death by lethal injection for her daughter’s murder. Her lawyers are mounting a new fight in state court, arguing that her conviction rests upon a false confession and faulty science. Her family members, the Innocence Project and the director of a Hulu documentary on the case are all campaigning for her life to be spared.

Executions of women are rare in the United States — 17 in the last half-century, compared with more than 1,500 men — but they tend to get outsized public attention and stir up debates on a variety of larger issues. Lucio’s case has been of particular interest to psychiatric and forensic experts, because it may demonstrate a phenomenon they’re just starting to understand. Survivors of trauma, they believe, are especially prone to taking the blame for tragedies they had nothing to do with.

“Anyone is going to feel stressed in the interrogation room, but for someone with PTSD it’s ramped up to 1,000,” said Lucy Guarnera, a psychiatry professor at the University of Virginia who studies false confessions. “A woman who has experienced domestic violence is now trapped in a room with men who are intimidating.”

Lucio’s family and lawyers allege that she was abused by several men in her life. This is common among women on death row, including Lisa Montgomery, the last woman executed in the United States. 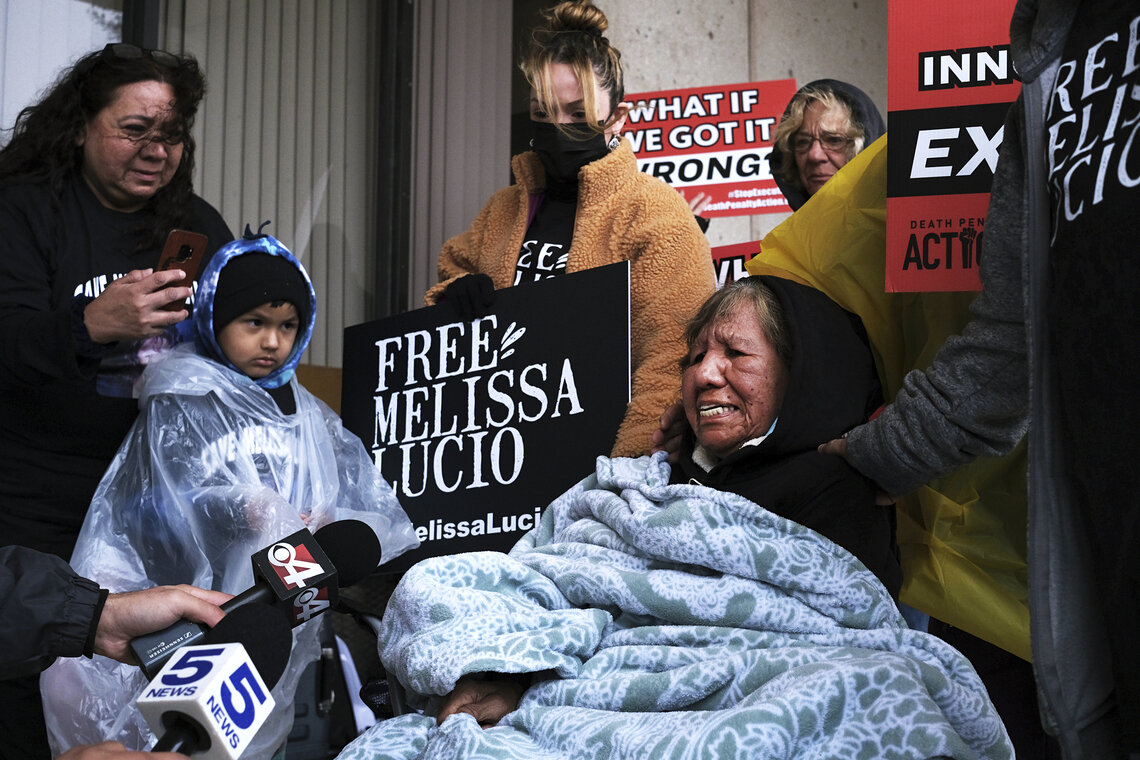 Esperanza Treviño, surrounded by family and friends, asked for the release of Lucio, her daughter, who is scheduled to be executed in April in Texas.

When Megan Crane, a St. Louis-based lawyer with the MacArthur Justice Center, a civil rights organization, began noticing that her teenage clients may have falsely confessed after experiencing trauma, she looked for research to cite in her court arguments, and couldn’t find much. “It’s obvious the intersection exists, but it’s a vacuum,” she said.

So she teamed up with Guarnera, as well as Virginia Commonwealth University criminal justice professor Hayley Cleary, to look at trauma among adolescents who had confessed to crimes. Around this time, lawmakers began trying to protect youth from aggressive questioning, motivated by high-profile cases like the Central Park Five and Brendan Dassey, the teenager whose confession to rape and murder was examined by the Netflix series “Making a Murderer.” Last year, Illinois and Oregon banned detectives from lying to suspects under 18, although it’s still legal to do so in the other 48 states.

For decades, psychologists have sought to understand why people falsely confess to crimes. (The National Registry of Exonerations has tracked more than 350 cases of false confessions since the 1980s.) They’ve come to blame the dominant style of American police interrogations, with its focus on lies (“We already know it’s you.”), minimizing language (“Maybe this was an accident.”) and ratcheting up the stakes (“They’ll fucking give you the needle.”).

Researchers say the risk of a false confession applies not only to traumatized kids, but also to adult victims of domestic violence. In the 1970s, forensic psychologist Lenore Walker published “The Battered Woman,” a study that described how abusive relationships can follow a “cycle of violence.” She began testifying in court, sometimes on behalf of women who were accused of killing their abusers.

Walker worked on the case of Darlene Green, who was convicted of killing her husband in 2010 in Washington. Green initially took responsibility, but in 2012, during her trial, she testified that he had actually shot himself. Green told the jurors about how he would berate her: “He would go on and on about things until I finally admitted it was my fault, and I was to blame.” She framed her confession as yet another example of this dynamic. Her conviction was overturned several years later, and she died in 2015 while awaiting a new trial.

After Green’s trial, Walker enlisted her graduate students at Nova Southeastern University in Florida to collect cases of women who, according to their court appeals, may have falsely confessed. They found 80. Roughly half of the women reported past trauma or abuse. More than a third said “threats to their children influenced their confessions.” Some appeared to confess to crimes as a way to protect their children from arrest, while others were afraid of future abuse by the true perpetrator — their boyfriend or husband.

Walker noticed that sometimes women face harsher sentences for deaths of children, pointing to Ashley Buckman, who faced the death penalty for the 2012 murder of her 4-year-old daughter in Phoenix, Arizona, while her boyfriend was sentenced to life in prison. “It’s because of the stereotypes about mothers,” Walker told The Marshall Project. “Juries hate women who ‘don’t protect their children,’ even if those women can be killed themselves.” Large-scale comparisons of sentencing outcomes are rare, but multiple studies have argued that stereotypes about motherhood have shaped how women are portrayed in courtrooms and the media.

Sometimes the woman isn’t afraid of a partner. She’s afraid of the interrogator.

Shanda Crain was convicted of killing her parents in 1995 in Washington Parish, Louisiana, but maintains her innocence. At the Louisiana Correctional Institute for Women, she took a university class called “Law and Feminism,” and she began studying the psychology of confessions. She wrote an academic paper analyzing her own case, using the third person to describe how a detective manipulated her: “The venom that dripped from his mouth and tone of his voice sent Shanda’s mind into a frenzy, flashbacking to all the times her husband would yell at her for no reason other than he could … In her mind she mentally prepared for the physical abuse that usually came next.”

Although Crain faced no physical danger from the officer, she believes she confessed in part due to a learned fear of violence. And when she learned about the case of Melissa Lucio, it felt familiar. “With all the police brutality that is being reported and visibly recorded in public,” she wrote in a message from prison, “can you imagine what goes on behind closed doors of an interrogation room?”

According to Lucio’s lawyers, men in her family began sexually abusing her when she was 6 years old, and her mother allowed her to get married at age 16 to a man who abandoned her after she’d given birth to five children. She married again and had nine more children. This husband, according to her lawyers, raped, beat and choked her. The Marshall Project and The 19th could not reach Lucio’s two ex-husbands, but Sabrina Van Tassel, the filmmaker who directed “The State of Texas vs. Melissa,” a documentary on the case, said both declined to speak to her on the record.

During her interrogation, Lucio repeatedly denied having struck her daughter. “They just kept pointing fingers at me and threatening me and telling me that I was going to spend the rest of my life in prison, that I wasn’t going to be able to see the rest of my children grow up and get married,” Lucio told the filmmaker. “They just kept throwing so many words at me, and I just told them, ‘I’m responsible for Mariah’s bruises.’”

An excerpt from the 2020 documentary film, “The State of Texas vs. Melissa,” shows Melissa Lucio’s interrogation. In the film, director Sabrina Van Tassel presents evidence that Lucio was wrongly convicted and sentenced to death. FILMRISE

After Lucio was arrested for killing her toddler, a social worker learned that an older daughter had taken responsibility for the little girl’s fall down the stairs. The social worker felt Lucio often acquiesced to men with authority because she was so accustomed to being abused. A psychologist wrote in a report that Lucio showed “a consistent pattern of ‘psychological numbing’ often identified with victims of violence and abuse.” Both testified when the jury was deciding Lucio’s punishment. Her lawyers have argued they should have also been allowed to testify when the jury decided whether Lucio was guilty at all.

The U.S. Supreme Court declined to hear her case last year, but a brief from advocates and experts on domestic violence questioned the Texas Ranger’s claim that Lucio’s slumped posture and other passive behavior suggested she was guilty and ready to confess. “Trauma victims often experience psychological reactions that make them look guilty, even when they are not,” they wrote. Escalon is now a senior official at the Texas Department of Public Safety, where a spokesman declined to make him available for an interview.

One of Lucio’s lawyers, Tivon Schardl, told The Marshall Project that the detectives tried to “gaslight” Lucio by telling her that she was the only person who’d been alone with her daughter. This wasn’t true, Schardl explained, but it forced Lucio to risk implicating a different family member by saying they had been alone with her. “The cops are telling her someone in the family is going to be held responsible,” Schardl explained, and Lucio was “a woman long accustomed to a life in which other people have value, but she’s expendable.”

In court filings, the Texas attorney general’s office, which did not respond to an interview request, maintained that Mariah’s autopsy showed she died from “blunt force head trauma.” They point out that an emergency room doctor who examined the toddler declared it the “absolute worst” case of child abuse he’d ever seen. In previous appeals, Lucio’s lawyers have argued that much of the state’s narrative rests on flawed science — that the “bite marks” allegedly found on Mariah’s body, for example, weren’t really from bites, and that the head trauma really could have stemmed from the fall. Her team may file new claims in court. Otherwise, her final option is to seek a commutation from Texas Gov. Greg Abbott, whose office declined to comment.

Whether or not Lucio is executed, her case will remain a focus for researchers trying to understand why some people are especially vulnerable in the interrogation room, and how they can be better protected. State lawmakers in New York are considering a ban on deceiving suspects. “Avoidance is one of the key trauma symptoms,” said Guarnera, the researcher. “In regular life that means not going where strange men are, not going to watch movies with violence. But in the interrogation room, it means getting out of the room by any means necessary — and the only way out is confession.”